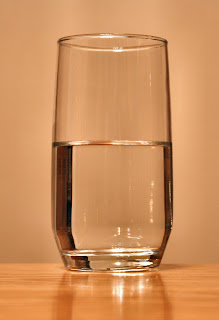 How do you describe the picture to the right?

A glass that is:
At first blush, an answer, one way or the other, is almost always given. What was your answer?

We also know that optimists tend to look at the bright side of situations and that pessimists look at the bleaker aspect of the same situations. In fact, both are so obsessed with their own point of view that they can't see the alternative.

In reality, both of the supplied answers create a nearly impossible construct of perspective because they are simultaneously right and wrong. Simply put, the picture above depicts a half a glass of water<&emdash>nothing more and nothing less; yet this is not an available answer. Perhaps this is intentional as the limited choices force a decision rather than a conclusion? Either way, in limiting the possible answers to only two, the question fails to provide for other perspectives and entirely omits reality.

As it is, there are those in life and in reality that will choose one side or the other and will stick to it regardless of the consequences or of the truth of the matter or of facts staring them in the face. At the same time, there is a large majority of people who look for the middle-ground never venturing into the extremes of perspective. Unfortunately, none of these get the whole picture.

While it's true that life is what you make of it, it rarely (if ever) presents an individual with only positive or only negative experiences. In order to get a full grasp on any given issue, one must learn to extricate him or herself from their own senses, not to ignore what is going on around them but to more accurately observe the complete picture.
Posted by O.H. at 00:18