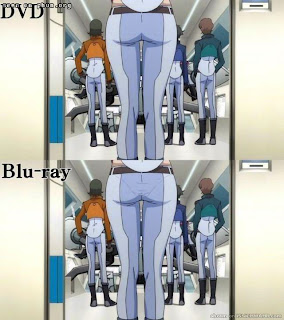 Exactly how much detail do you really want?

My parents have a Blu-ray player where I am limited to standard def DVD, so when we go to visit, I like to observe the differences. So far, I've got to say, I'm unimpressed.

I don't know about you, but I like to escape reality when I watch a movie. I like it when the plot and the acting draw me into the universe that is unfolding onscreen. My experience so far with Blu-ray is that something is off about the optics. Of course, the picture is clear, and the movie or television program is whatever it may be. But, something happens with the Blu-ray with the High-definition movies I have watched at my parent's house. It could be the depth, or it could be the brand and model of my parent's blu-ray player, but the movie ceases to have the magic it seems to have in standard definition.


Take, for example, "The cliffs of insanity" sequence from The Princess Bride. You recall that Vizzini, Fezzik, Inigo and Buttercup, reach the top of the cliffs where the three men are stunned to realize that Westley is not only climbing the cliffs, he is catching up to the group at the top. Then Inigo waits around to duel (left-handed because he will not be satisfied dueling right-handed) Westley to the death. It is a great scene with memorable lines, and in standard definition, permits us to believe the cliffs of insanity and the ruins at the top are real.

Unfortunately, when I watched it on Blu-ray, that belief was lost because suddenly the scene—one we all know in the back of our minds is a set piece—takes on the appearance and feel of a stage play. Disappointing, to say the least. It's inconceivable!

Where the problem lay...I don't know. I do know if High Definition is going to suck my fantasies onto a stage, I prefer to stay with standard definition.
Posted by O.H. at 18:13