Rehobama, the First King of the USSA

It is unfortunate that because of the first amendment and a misunderstood letter from President Thomas Jefferson to the Danbury Baptists, many people are afraid to mix politics with religion. They, however, fail to realize that religion and politics are mixed together so well that it is almost impossible to differentiate political fanatics from religious fanatics.

We might do well to acknowledge the relationship rather than hide from it. We would also do well to acknowledge that faith is individual and private. It should not be, though often is, a public matter. Furthermore, on the public scene, there is too great a tendency to throw the baby out with the bath water. This is true of both political and religious controversy. Choose an issue, and you will see it happen.

Case in point: The Bible has mountains of good information. Yet, when someone has an issue with the nature of God or with some lesson the Bible teaches, they throw the whole book out.

With that in mind, there is within the Bible an account of a new king that is particularly salient to US Politics today.

The following is adapted from 1 Kings 12:

1 AND [Obama] went to [Washington D. C.]: for all [Zombies] were come to [Washington D. C.] to make him king.
2 And it came to pass, when [Mitt] the son of [George], who was yet in [Massachusetts], heard of it, (for he was [elected during the time of George W. Bush], and [Mitt] dwelt in [Massachusetts];)
3 That they sent and called him. And [Mitt] and all the [citizens of America] came, and spake unto [Obama], saying,
4 Thy father made our [taxes] grievous: now therefore make thou the grievous service of thy father, and his heavy [taxes] which he put upon us, lighter, and we will serve thee.
5 And he said unto them, Depart yet for three days, then come again to me. And the people departed.
6 ¶ And king [Obama] consulted with the [Republican Leaders in Congress], that stood before [George W. Bush] his [predecessor] while he yet lived, and said, How do ye advise that I may answer this people?
7 And they spake unto him, saying, If thou wilt be a servant unto this people this day, and wilt serve them, and answer them, and speak good words to them, then they will be thy servants for ever.
8 But he forsook the counsel of the [Republican Leaders in Congress], which they had given him, and consulted with the [labor unions] that were grown up with him, and which stood before him:
9 And he said unto them, What counsel give ye that we may answer this people, who have spoken to me, saying, Make the [taxes] which thy father did put upon us lighter?
10 And the [labor unions] that were grown up with him spake unto him, saying, Thus shalt thou speak unto this people that spake unto thee, saying, Thy father made our [taxes] heavy, but make thou it lighter unto us; thus shalt thou say unto them, My little finger shall be thicker than my father's loins.
11 And now whereas my father did lade you with a heavy [tax], I will add to your [taxes]: my father hath chastised you with whips, but I will chastise you with scorpions.
12 ¶ So [Mitt] and all the people came to [Obama] the third day, as the king had appointed, saying, Come to me again the third day.
13 And the king answered the people roughly, and forsook the [Republican Leadership's] counsel that they gave him;
14 And spake to them after the counsel of the [labor unions], saying, My father made your [taxes] heavy, and I will add to your [taxes]: my father also chastised you with whips, but I will chastise you with scorpions.
15 Wherefore the king hearkened not unto the people;
16 ¶ So when all Israel saw that the king hearkened not unto them, the people answered the king, saying, What [voice] have we in [congress]? neither have we inheritance in [government]: to your [states], O [America]: now see to thine own house. So [America] departed unto their [states].
17 But as for the [Americans] which dwelt in the cities of [Chicago, Detroit, Los Angeles, New York, and Seattle], [Obama] reigned over them.
18 Then king [Obama] sent [Timothy Geithner], who was over the tribute; and all [America]stoned him with stones, that he died. Therefore king [Obama] made speed to get him up to his [motorcade], to flee to [Chicago].
19 So [America] rebelled against the [congress] unto this day.
20 And it came to pass, when all Israel heard that [Mitt] was come again, that they sent and called him unto the congregation, and made him king over all [America]: there was none that followed the [congress], but the [Progressive caucus] only.


While some of the modifications to the original text are somewhat satirical, the lesson contained in this passage is not. Let the passage percolate for a bit. There's more to it than just taxes.

Excessive taxes are not healthy for a nation, and the wise, old men tend to advise against them. Young upstart Progressives, however ignore this message and seek to jack the taxes up to the max.

There are a lot of lessons we can learn from the founders. In a speech on the floor of the House of Representatives only one year after the ratification of the Constitution, James Madison said:

There is not a more important and fundamental principle in legislation, than that the ways and means ought always to face the public engagements; that our appropriations should ever go hand in hand with our promises. To say that the United States should be answerable for twenty-five millions of dollars without knowing whether the ways and means can be provided, and without knowing whether those who are to succeed us will think with us on the subject, would be rash and unjustifiable. Sir, in my opinion, it would be hazarding the public faith in a manner contrary to every idea of prudence.


At first glance and on the surface, this quote wisely and adequately addresses the fiduciary responsibility congressmen have to the American people. However, there is a clue that suggests there may be more to the address than its face value. The clue begins the last sentence: "Sir."

The "Sir" Madison is addressing may be two entities: The Speaker of the House and a faction of congressmen who had other plans for the people's money than Madison thought to be appropriate.

Madison was a Representative for the state of Virginia in the fledgling years of the United States' government, and so was undoubtedly addressing the Speaker of the House of Representatives.

Yet, this by no means eliminates the other possible entity. Anyone who has studied Robert's Rules of Order knows that in business and government settings, one who desires and obtains the floor for the purpose of addressing an issue does so by addressing the ranking member of the body. In the case of congress, he or should would be either the Speaker of the House, or the President of the Senate.

Even though the "Sir" he is addressing formally is the Speaker of the House, his message is just as likely to be addressing members of congress who had designs on the people's money that may not have been prudent or honest.

From this, we can reasonably conclude that, like there are today, there were elected officials who argued for all sorts of ways to spend the people's money without any kind of thought for responsibility to the people.
Posted by O.H. at 15:17 No comments:

Support A Good Cause: ThirdRailers.com

If you like what I do here, you'll love ThirdRailers. ThirdRailers is not as serious as Brain Vomit tends to be. They're filled with more satire. I only wish I were that creative with serious matters!

Check them out. If you like what you find, be sure to check out ThirdRailers Station and support them and support capitalism in any way you are able.

I have. I own this shirt: 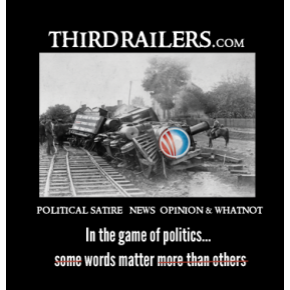 Though it's a lint trap, it is soft and comfortable, and I wear it frequently. Buy one! You'll like it! 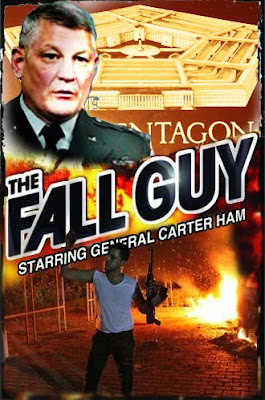 Alongside General Carter Ham, Gaouette can be seen playing an Admiral speaking out in support of sending help to a besieged Embassy in Bengahzi, Libya. The two men, ready to send help, are commanded by the upper echelons of the US government to "stand down" which results in the death of a US Ambassador and three other American citizens.

Unfortunately, the fiasco brings the heat at home, and the President can't be held accountable for anything. Somebody must lose their job!! Political logic dictates that those who were most eager to help must pay the price. Watch General Carter Ham and Rear Admiral Charles M. Gaouette fall on their swords at the whim of a President willing to kill American citizens for political reasons. Who will be next as The Fall Guy becomes Fall Guys? Only time and Executive Treason Films can tell.
Posted by O.H. at 12:26 1 comment: