Why You Should Vote "NO" on the Constitutional Amendment in Idaho

Like many Idahoans who are reading this, I recently received a copy of the “Idaho Voter's Pamphlet: Concerning Proposed Constitutional Amendment H. J. R. 2.”

Upon reading it, I was immediately reminded of the interlude between Boromir, the son of the Steward of Gondor, and Frodo, a hobbit, in Peter Jackson's film, The Lord of the Rings: The Fellowship of the Ring.

During this exchange, Boromir uses sympathy, reason, and logic with Frodo in an effort to secure the One Ring from Frodo in a vain attempt to use it to defend Gondor from the evil Lord Sauron, who made the ring and who is the only one able to control it.

Before Boromir can complete his argument, though, Frodo says, “I know what you would say, [and] it would seem like wisdom but for the warning in my heart.”

From Death to Debt

In light of the Republican Leadership's recent cave-in in passing a "clean" debt ceiling bill, I was reminded of Patrick Henry's rally, "Give me liberty or give me death," and conjured up this meme as a result: 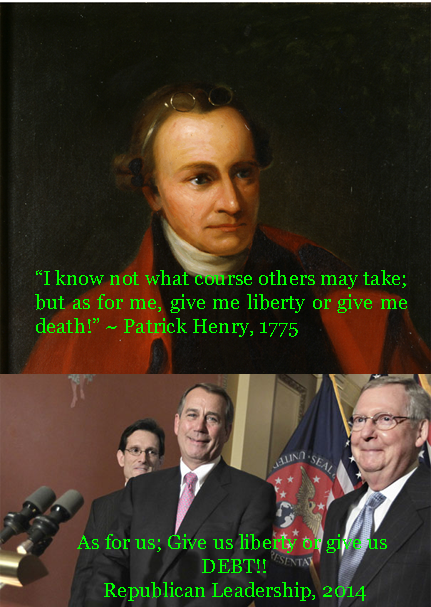