The Facts of the Immigration Debate 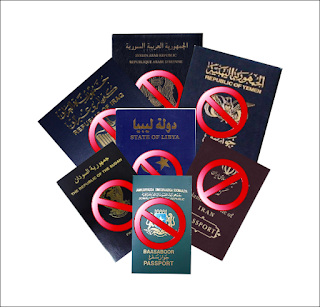 1/29/2017 Update: This article was originally written 12/13/2015 during the Republican Presidential primary. While much of the article remains true to current events, there are some relevant updates. As President, Donald Trump signed an Executive Order on Friday, January 27th, 2017 restricting entry to individuals traveling from Iran, Iraq, Libya, Somalia, Sudan, Syria, and Yemen. While the ban unfortunately includes refugees from those nations, there isn't a "better" way to for the President to have done this.

Rather than banning travelers based on their religion, the ban applies to nations of origin and falls within the purvue of Presidential action.


Unless you've been living under a rock on the forest moon of Endor for the last couple of weeks, you're probably aware that Donald Trump, in his campaign for the Presidency of the United States, has once again inflamed the political elites from all sides of the spectrum. In a press release on pausing Muslim immigration to the US, we learned, "Donald J. Trump is calling for a total and complete shutdown of Muslims entering the United States until our country's representatives can figure out what is going on."

Wait, what?! You can't do that! You can't shut out an entire religion!


That's right. Donald Trump has proposed closing the border to immigrants professing a specific religion: Islam, and the political world is in turmoil.

Trump's problem isn't that he's announced plans to suspend immigration; it's that he's based the suspension on the religious affiliation of a given set of immigrants.

Interestingly enough though, there is legal grounds for the ban proposed by Trump. In June 1952, Congress passed the Immigration and Nationality Act later to become Public law 414. Section 212  of that law includes the following clause:

(f) Suspension of entry or imposition of restrictions by President

Given that the same section is also found verbatim in US Code, it's safe to conclude that it has neither been repealed nor amended in any way.

In defending Trump's position, some have observed that in 1979, President Jimmy Carter, a Democrat, exercised this very authority by suspending immigration from Iran during the Iran hostage crisis.

Unfortunately for those who have defended Trump's proposal, the immigration ban of '79 and the one proposed by Trump differ in a critical way: Trump wants to ban Muslims where Carter banned Iranians. (As mentioned in the Update, The Executive Order signed on Friday, 27 January 2017 bans travelers from specific nations, not based on their religion.)

However, remember, "the President...may by proclamation...suspend the entry of all aliens or any class of aliens as immigrants..."

Any or all; two words in the English language used to identify a totality in selection. In this case, religious groups, or any other group, can be excluded from entry into the United States if they would be considered "detrimental to the interests of the United States."

Even so, Liberals like the Obama Administration (yes, every last one of them) and Neo-Conservatives like Lindsay Graham and John McCain, and establishment Republicans like Paul Ryan and Mitt Romney have all balked at Trump's proposal calling it unconstitutional. They argue that Trump is administering a religious test which is unconstitutional. Granted, the Constitution trumps public law and the US Code, but, there's a problem with their argument.

While The religious test clause is found in Article VI of the US Constitution, it is very specific and applies only to candidates running for public office:

The Senators and Representatives before mentioned, and the Members of the several State Legislatures, and all executive and judicial Officers, both of the United States and of the several States, shall be bound by Oath or Affirmation, to support this Constitution; but no religious Test shall ever be required as a Qualification to any Office or public Trust under the United States (emphasis added).

Even though there are some parts of the Constitution in which the language is muddled, if not downright cryptic, the language in Article VI could not be more clear. In 2008 and 2012, Mitt Romney could not have been kept from running for President merely because of his membership in The Church of Jesus Christ of Latter-day Saints. Likewise, Richard Dawkins can not be kept from running for public office because he is an Atheist who scoffs at anyone who believes in any kind of deity. In fact, in a more relevant case, if Representative Keith Ellison chose to do so, he cannot be prevented from running for President on the sole grounds that he is a Muslim.

Additionally, the phrase, "no religious Test shall ever be required," appears nowhere else in the Constitution. Consequently, unless it has been added to the US Code by an act of Congress, it doesn't apply to any other legal or political situation.

Ironically, no one making the "religious test" argument regarding Trump's proposal to temporarily ban all Muslim immigration is actually citing the clause in Article VI. Instead, they cite the cornerstone of American liberty, the first amendment:

Congress shall make no law respecting an establishment of religion, or prohibiting the free exercise thereof; or abridging the freedom of speech, or of the press; or the right of the people peaceably to assemble, and to petition the Government for a redress of grievances.

Islam is, after all, a religion—or, at least, it has religious elements, right? So, if we exclude Muslims from entering the country, we must be infringing on their right to practice their religion somehow.

Wait, what?! You mean to tell me that if we prevent foreign Muslims from entering the United States, we are either establishing a state religion or we are prohibiting them from exercising their religion?

This, my friends, is a logical fallacy known as a non-sequitur that falls flat on its face. A non-sequitur occurs when a conclusion or statement does not logically follow from the previous argument or statement.

Of course it would be phenomenally bad for a candidate for public office to advocate the infringement of religious rights—regardless of what religion that may be. Moreover, I would be among the first in line to defend an individual's religious rights whether they profess a religion or not. However, as bad as it sounds, banning Muslims from immigrating to the United States DOES NOT infringe on their right to practice their religion.

I realize that some will think I'm splitting hairs, but I'm not. Muslims seeking entrance to the United States practice their religion freely now. In fact, for the most part, they are not coming to America seeking religious freedom and tolerance. Keeping them from entering the United States does not and will not change that.

In reality, there would be a stronger case to be made of infringing religious rights if Coptic Christians were being denied entrance into the US as they are not able to freely exercise their religion now, and yes, that's a critical difference and consideration between the two examples.

Despite all of this, people will still see the religious element more than the migrant element. Accordingly, then Mr. Trump would do well to emulate Senator Rand Paul on this issue: